MONTREAL, July 15, 2021 /CNW Telbec/ – The Montréal Pride Festival today confirmed that its flagship event, The Pride March, is back as an in-person event on August 15 and invited the public to assemble as of noon at Jeanne-Mance park for one of the first physical gatherings in support of the 2SLGBTQI+ communities since the beginning of the pandemic with participants marching along a new route! The event will be adapted to the current health context which does not authorize a Parade as traditionally held, and return to the roots of the Pride movement by handing back the public space to participating communities. Under the theme “Together for All”, this year’s Pride March with no vehicles, floats or contingents, will be focusing all the attention on the voices and opinions of our sexually and gender diverse communities so that their demands may be highlighted in a context where because of the pandemic, they had recently been made close to invisible. 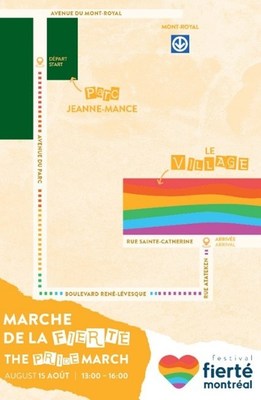 Starting at noon, participants who do not need to register in advance, will be welcomed at the assembly point in Jeanne-Mance Park, at the corner of Mont-Royal and Park avenues, for the departure at 1 p.m. Heading South on Park Avenue, the March will continue to René-Lévesque Boulevard and turn East towards Atateken Street where it will turn left and come to an end in the Village, on Ste. Catherine Street.  At 2:30 p.m., the traditional Moment of Silence will be held, in memory of the victims of HIV/AIDS and of homophobia. Banners, streamers, decorative and advocacy placards with messages of demands and claims will be authorized and even encouraged under the condition that the respect and safety of all be ensured.

« For some years now, the Festival’s team has sought to highlight the spirit and the community contributions of the various 2SLGBTQI+ communities and this year, the pandemic has somewhat imposed it on us. The first demonstration in favor of the Montréal 2SLGBTQI+ communities’ rights was held in 1979, organised by the Pink Brigade and its founder John Banks with 52 marchers participating. It is therefore with great pride that we confirm not only the holding in its original march form of the most mobilizing event of the Festival but also of a unifying activity open to all that will allow the advocacy and community aspects of the festival to shine,” says Jean-François Perrier, Interim Director of the Montréal Pride Festival.

In order to abide by the health rules in place, the use of masks is recommended and several teams will be deployed to ensure the safety of all festival goers in every respect.

A complete list of projects classified by organisation is available here.

About the Montréal Pride Festival

Since 2007, at the initiative of Montréal’s 2SLGBTQI+ communities, the Montréal Pride Festival has been promoting their rights and celebrating their cultural richness and social advances. The largest gathering of the sexually and gender diverse (SGD) communities in the Francophone world, it works locally on a daily basis while serving as a beacon of hope for people living in 2SLGBTQI+ hostile regions of the globe. In 2020, the festival produced a 360 Edition with all of its festivities presented in a digital format in compliance with health measures in place then. In 2021, the festivities are being held from August 9 to 15 and will present a hybrid program mixing in-person physical events with virtual presentations. More information is available on the web page, the Facebook page, as well as Twitter and Instagram accounts.