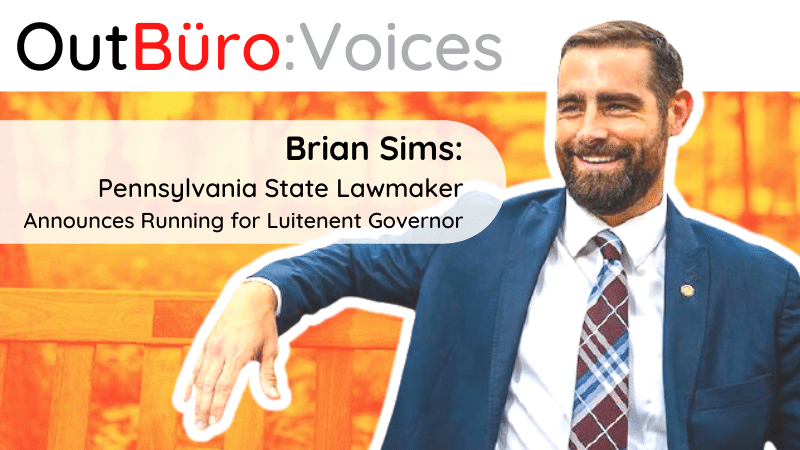 In this episode of OutBüro Voices featuring LGBTQ professionals, entrepreneurs, and community leaders from around the world, host Dennis Velco chats with out gay Pennsylvania State Lawmaker Brian Sims, who just days after this recorded chat wherein I asked about political aspirations, he announced that he is running for Pennsylvania Lutienent Governor.   Sly devil.

Here is his announcement regarding running for Pennsylvania Lutienent Governor https://www.youtube.com/watch?v=ejiy3kNTI6g

At 29:00 Brian shares what his calendar looks like today, an average day.  Oh goodness, I needed another coffee just hearing that.  After a week of that schedule, a good date night and massage sound in order.  ?

Son of two Army Luitenent Colonels, Brian moved around quite a bit as most military families do.  From an early age, he knew he wanted to become a lawyer with a focus on equality and women’s issues.  His parents with his twin brother, older brother, and younger sister settled in Pennsylvania where he attended high school and undergraduate school. After law school in Michigan, he returned to Philadelphia.  At this point, he was aware of sexuality and realized he was moving back to a state with zero LGBTQ equal rights.

To this day, Feb 2021, if not for the Federal Workplace Nondiscrimination at the Pennsylviania state level they still, despite a continued effort often led by Sims, Pennsylvania cowardly Republican lawmakers choose to force all state citizens to live in fear of LGBTQ legalized discrimination due to their lack of humanity, civility and common sense. As Sims describes, Pennsylvania Republicans hold power not by popular democratic vote but rather manipulate the district lines to suit their whim.  Elected officials such as Sims is striving to restore fair representation and instill human deginity values to the state.

The real rub is that many of those lawmakers personally support equality, yet due to the corrupt Republican Party, they had to toe to line and vote as they were told to vote else suffer the political schoolyard style bullying.  They don’t see that not standing up to their own bullies means they are leaving thousands of Pennsylvania LGBTQ citizens open to bullying, discrimination, homobobic attacks, and more. They can’t even stand up for what they know is right.

What is the answer?  REPLACE them. Run for office.  Support diverse candidates including out LGBTQ political candidates at all levels.  Learn more about The Victory Fund here: https://victoryfund.org/

Get to know Brian a bit as we chat about his coming out while the captain of his college football team.  We continue on discussing how diversity matters in politics and the corporate workplace.  We round out the conversation chatting about being on PrEP where I give a shout out to the great care I have received at the Veterans Affairs getting my PrEP through the VAcfor two years and now through http://www.HeyMistr.com.  See the interview with Tristan the founder of Mistr here for all the info. https://outburo.com/hey-mistr-are-you-on-prep-hiv-aids-prevention-online-prescription/