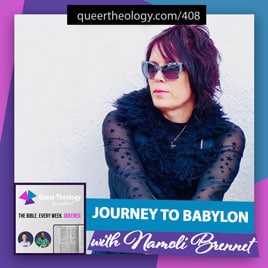 In this week’s guest episode, we have Trans singer and songwriter Namoli Brennet on the podcast. Her music has been an inspiration to so many, especially the Trans community. We talked about how she writes her songs and her journey beyond her music. Tune in as Namoli plays some of her beautiful and moving songs for us “live”.

Trans* artist Namoli Brennet has been writing, recording, touring, and releasing albums since the age of Napster. Country Queer calls her latest release, Light It Up, “An uplifting shot of hope…that queers the sonic landscape.” A multi-instrumentalist with a degree in composition, Brennet’s decades-long career has seen her morph from more traditional singer/songwriter fare into what one reviewer called a “sonic painter,” creating rich, ambient textures as a backdrop for often profound and poetic lyrics. Her music explores themes of belonging, struggle and spirituality and paints a picture of an artist who’s spent their share of time looking for light in the darkness.

Namoli has performed in most of the continental United States, Canada, Mexico, Austria, Switzerland and Germany; has been nominated for numerous Outmusic awards, the German Music Critics award (twice) and was listed on the inaugural Trans 100 list. She’s also been featured on NPR and her music is featured in the Emmy-award-winning film Out In The Silence.

If you want to support the Patreon and help keep the podcast up and running, you can learn more and pledge your support at patreon.com/queertheology.

The post Journey to Babylon with Namoli Brennet appeared first on Queer Theology.

With this week’s podcast Brian and Shay pull back the curtain and reveal some of the inner motivations that led to the creation of Queer Theology and why they do things the way they do. What does it mean for…

Brian and Shay tackle this week’s uncomfortable Gospel reading. What is the difference between the tax collector and the Pharisee? What does this passage have to say to us today? The post What about sin? – Luke 28:9-14 appeared first…

Sometimes Fr. Shay and I feel like we’re a bit of a broken record. I mean, how many times can we possibly talk about justice? Today’s lectionary text reminded Brian that we talk about many of the same themes and issues…