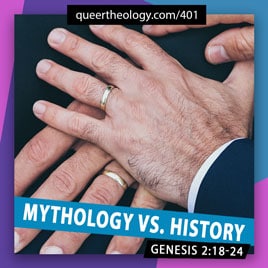 In this episode, we answer another anonymous question from a Tumblr follower who used to veil a lot before knowing that they are nonbinary. This listener is conflicted as veiling is something they are called to in terms of spiritual practice but felt wrong doing so since they are more trans masculine than anything else. “Would it be wrong of me to veil/do you have advice dealing with traditionally gendered beliefs and practices as a nonbinary person?”

We then queer the text from Genesis, where Brian dives deeper into what the Eden story means for him and how he understands it as a queer person. Fr. Shay also discusses how this text is more of a myth than history – that folks should not treat it as “fact,” especially when categorizing and representing gender and sexuality.

Video mentioned in the episode: https://www.queertheology.com/garden-of-eden/

Then the Lord God said, “It’s not good that the human is alone. I will make him a helper that is perfect for him.” So the Lord God formed from the fertile land all the wild animals and all the birds in the sky and brought them to the human to see what he would name them. The human gave each living being its name. The human named all the livestock, all the birds in the sky, and all the wild animals. But a helper perfect for him was nowhere to be found.

So the Lord God put the human into a deep and heavy sleep, and took one of his ribs and closed up the flesh over it. With the rib taken from the human, the Lord God fashioned a woman and brought her to the human being. The human said,

“This one finally is bone from my bones

and flesh from my flesh.

She will be called a woman

because from a man she was taken.”

This is the reason that a man leaves his father and mother and embraces his wife, and they become one flesh.

This passage reminds us that God has a particular care for people who are marginalized, vulnerable, disenfranchised, and oppressed. In this episode we dig into why that’s important and what that means for our lives and relationships. Jeremiah 31:7-9 This…

Brian and Fr. Shay talk about the difference between historical fact and truth. What does it mean for our faith if things like “The Exodus” aren’t historically factual? What particular gift do queer people have to offer in the realm…

In this passage, Paul is convinced that the world is ending within his lifetime and—spoiler alert—it doesn’t. Sometimes the writers of the Bible get things completely wrong. In this episode, we explore the implications of that for our faith and lives.…