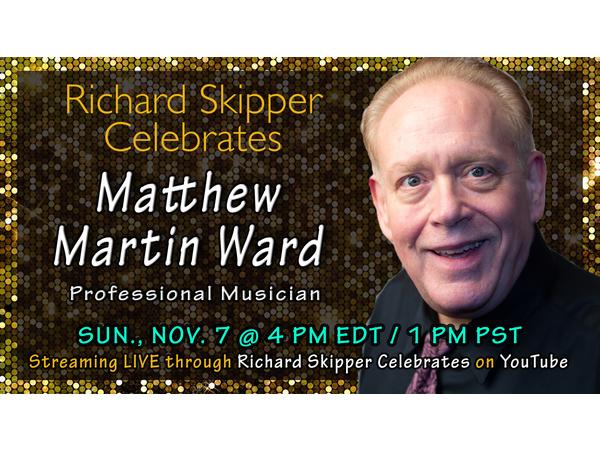 For Video Edition, Please Click and Subscribe Here: https://youtu.be/GIRI4D9bTNo Just concluded my conversation with Richard Skipper as the subject of his Celebrates series.(11/7/21) So much fun to do, and Richard has the knack of asking insightful questions leading to forgotten yet cherished moments of my life. Bravo! Matthew Ward, NYC   Matthew Martin Ward has played in the Broadway orchestras of many shows, including Avenue Q, Tarzan, La Cage Aux Folles, Urinetown, Tommy, State Fair, and Blood Brothers. He was the musical director of two editions of the long-running Off-B’Way hit Forbidden Broadway (Strikes Back and Cleans Up its Act) and can be heard on those cast albums (DRG). Other Off-B’Way hits include Whoop-Dee-Doo (RCA records), Nunsense and Ruthless. His longtime collaboration with Christine Pedi has taken him all over the world including London, South Africa (3 times!) and cruises on the Baltic and Mediterranean seas. He is the music director for her two albums Great Dames and Good to Mama. Mr. Ward is the composer of After the Fair, (book & lyrics Stephen Cole) which has been produced here at the York Theatre (Outer Critic’s Circle nom.), Dallas (multiple Leon Rabin Awards) London, Chicago, Seattle and more. The cast album featuring the York cast has been recorded on Fynsworth Alley. Casper (w/Cole) about the ghost, toured with the legendary Chita Rivera as star, and was later adapted for the Cincinnati Children’s Theatre. The Lady in Penthouse B (book and lyrics Peter Napolitano) was presented at the York Theatre and Urban Stages with Tovah Feldshuh, Nancy Dussault and Klea Blackhurst in the title role. https://www.facebook.com/matthew.m.ward.1

For Video Edition, Please Click and Subscribe Here: https://youtu.be/pu6gDjQh-VI Dr. Judi Bloom is a practical, interactive, solution-focused therapist specializing in relationships and in navigating through major life transitions. For 26 years she has treated patients of every background and helped them…

For the video version with clips, go here and subscribe: https://youtu.be/Q_2KjlOFMSs Sparky Marcus is a former actor. He was born in Hollywood. He was well known for playing the role of the precocious child but also worked extensively as a voice…