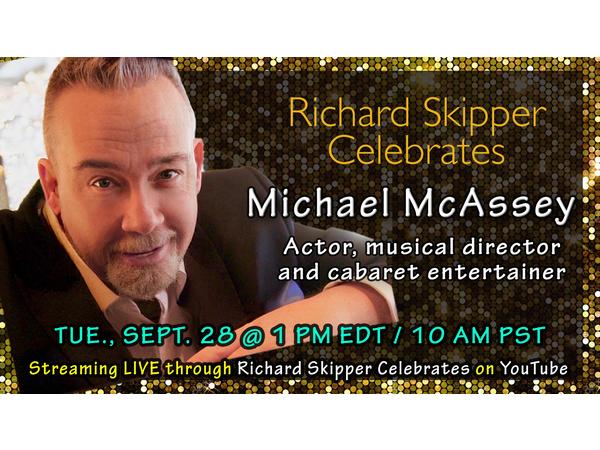 For Video Edition, Please Click and Subscribe Here: https://youtu.be/2dh7hwfOh9U MICHAEL McASSEY is a 4 time MAC and BISTRO Award winning entertainer recently heralded by BROADWAY WORLD as “The clown prince of New York cabaret!” He currently hosts OPEN MAC LIVE! at Brandy’s Piano Bar every Monday night. “Mac” has been a popular member of the New York Piano Bar & Cabaret communities for over 35 years, whether at the piano or standing center stage. In NYC he opened both DON’T TELL MAMA and EIGHTY-EIGHT’S, and he appears regularly at clubs in Chicago, Provincetown, Puerto Vallarta, Miami/Ft. Lauderdale and Atlantic City to name a few. An accomplished conductor & music director, Mac divides his time between onstage and off including conducting the Broadway National Tours of AVENUE Q, TITANIC: THE MUSICAL, PRISCILLA, QUEEN OF THE DESERT and appearing onstage as Edna Turnblad in 2 companies of HAIRSPRAY and as Max Bialystock in 3 different companies of Mel Brooks’ THE PRODUCERS. (www.michaelmcassey.com) “One of cabaret’s most talented troubadours with the pianistic finesse of Michael Feinstein, smooth phrasing of Tony Bennett and the bawdy wit of Bette Midler!” BROADWAY WORLD “Non-stop entertainment, punctuated as often by his dazzling vocal prowess as it is by his comic genius” NEW YORK POST “He manages to somehow be both cabaret’s most accomplished balladeer, and it’s wildest, most uninhibited musical clown!” VARIETY “McAssey is the love child of Robin Williams and Mae West, and the grandson of Mel Torme!” NiteLife EXCHANGE

For the video edition, click here and subscribe: https://youtu.be/5r-szrN_tag For 5 decades Wayne Smith has been entertaining the world as a celebrity impersonator. Starting at the famous La Cage Aux Folles in Los Angeles portraying Marilyn Monroe, Dolly Parton and…

For Video Edition, Please Click and Subscribe Here:  https://youtu.be/kee17czSjuM Christopher Peterson is a master of impersonations, both visually and vocally, and his comic timing is impeccable. The show is All Live, no lip-sync, and audiences are thrilled with his characterizations of…

Since receiving a perfect score and making it to the semi finals on "America's Got Talent” Shawn's star has continued to rise. Shawn’s directorial debut was with the critically acclaimed short film “Charlie”, which screened at the 2015 Cannes Film Festival…