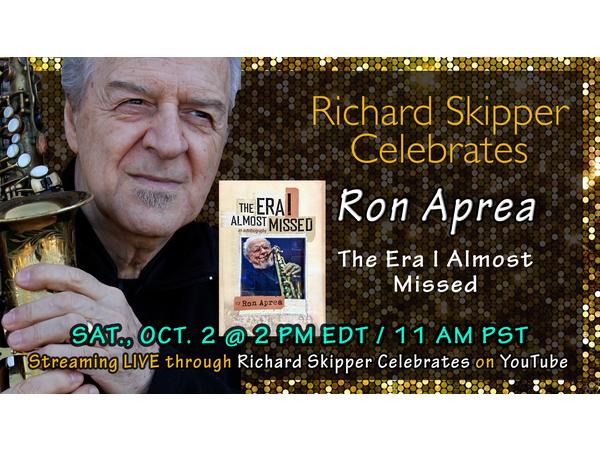 For Video Edition, Please Click and Subscribe Here: https://youtu.be/fhidKvftVpI Ron Aprea grew up in Astoria, NY and clearly remembers seeing Pete Fountain playing the clarinet on television. Inspired to play, Ron went to his elementary school band director, Mr. Cahill, and asked to play what he thought was Pete’s instrument, a saxophone. So that’s what the school gave him. That little mistake has given the world of Jazz an artist that contributes to the genre with exceptional skill to this day. Continuing to play throughout his school years, Ron finally got his own alto saxophone at age 16 and started taking lessons in a studio across the street from Radio City Music Hall. It was also during this time that Ron would frequent the famed Birdland Jazz Club on Broadway. He spent a lot of time soaking up inspiration from all of the Big Band and Jazz legends that played the club – such as Count Basie and Blakey’s Jazz Messengers. Both would prove to be major influences in Ron’s career. It was at Birdland that Ron met Frank Foster, who played with and arranged for Count Basie; the two became lifelong friends. One of many prized items in Ron’s memorabilia is a collection of original arrangements that Frank had written for Basie’s band and then gave Ron copies for his band. Ron has spent years perfecting his musical prowess. He’s played with legends like Woody Herman, Tito Puente, Billy May, Skitch Henderson and Lionel Hampton. While playing with Hamp, he had the opportunity to do a recorded performance at the Smithsonian Institute, where Ron’s solos were taped and placed into their Archives. As part of an All-Star band, Ron played at a 2001 Charlie Parker Birthday Tribute in Harlem. He has also been featured during performances at the Paramount Theatre and the world famous Apollo Theatre.

For video version, click here: https://youtu.be/WIDyhvj554E In an idea suggested by Mary Lahti, Tym Moss and Richard Skipper will celebrate each other! TYM MOSS is one of New York City's Most dynamic performers. This Singer/Actor/Radio & TV host/Producer can be…

For Video Edition, Please Click and Subscribe Here:  https://youtu.be/QGXpEC9wNEg This is the show in which therapy and entertainment come together to show artists how to not only cope in the age of COVID but also how to keep creating. Dr. Bloom…

For the video edition, click here and subscribe: https://youtu.be/5SiecVwRlwQ Carter Calvert is best known for originating her role in the Tony-nominated, It Ain't Nothin' But The Blues on Broadway. The New York Times wrote, "Carter Calvert effervesces: her voice echoes…