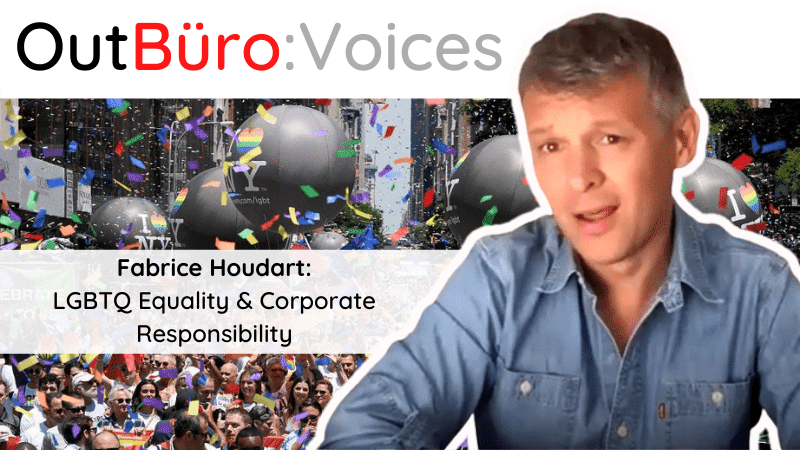 In this episode host, Dennis Velco chats with Fabrice Houdart about LGBTQ equality and corporate responsibility. Fabrice has had a fascinating career championing for lesbian, gay, bisexual, transgender, intersex, and queer rights and equality. Currently, he is the Managing Director, Global Equality Initiatives at Out Leadership.

Fabrice Houdart was previously Human Rights Officer at the United Nations in New York, and for the past four years, he worked on Free & Equal, an unprecedented United Nations campaign for LGBTI equality. He co-authored and led the United Nations Global LGBTI standards of conduct for Business, the largest corporate social responsibility initiative on LGBTI issues in the World. To date, more than 270 of the largest companies in the world have expressed support for the initiative. From 2001 – 2016, Fabrice was Senior Country Officer at the World Bank. At the Bank, he authored economic development analyses on Yemen, Uzbekistan, Tajikistan, and Tunisia and provided contributions to the 2012 Gender World Development Report (WDR) and the 2011 Conflict, Security, and Development WDR. He holds a B.A. in economics and management from Dauphine University in Paris and an MBA from American University in DC. Fabrice volunteers on the Board of Outright Action International, Housing Works, the NYC Gay Men’s Chorus, Alturi, the KindRED Pride Foundation, Witness to Mass Incarceration, and the Institute of Current World Affairs (ICWA). In 2019, he received the Golden Gate Business Association Award, the IGLTA Pioneer Award, and the Alan Turing LGTBIQ Award for his work on LGBTI rights. He was ranked 2nd by Yahoo Finance among LGBTI public sector executives globally in their 2019 Outstanding list. He was interviewed by The Economist, quoted in the New York Times, Foreign Policy Magazine, and The Guardian on issues pertaining to the human rights of LGBTIQ people. He lives in New York City with twin sons 6-year old Maxime and Eitan.