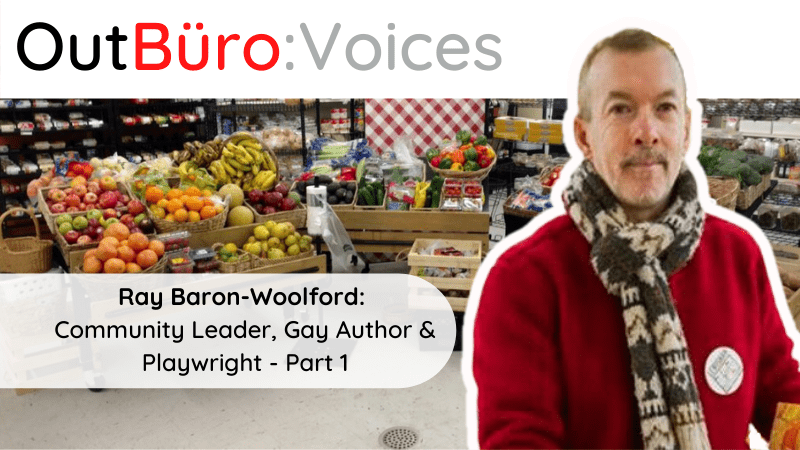 In this episode of OutBüro Voices featuring LGBTQ professionals, entrepreneurs, and community leaders from around the world, host Dennis Velco chats with Ray Barron-Woolford, a community activist to his core, political assignation attempt survivor, book author, playwright, and so much more.

If you want inspiration into the potential impact one person can make when you believe in yourself AND take action, this conversation is for you. Ray Barron-Woolford is one of the first out gay politicians in Britain (United Kingdom). He has a lifetime record of being a community activist championing for establishing the first not for profit housing organization in Britain and established the largest independent food bank in the UK We Care food bank. He is a gay hate crime murder attempt survivor. He has been and currently many entrepreneurial ventures including being a club promoter, club owner, broadcaster, playwright, and author in addition to being a politician, and community activist. He is a regular contributor to The London Economic, and regular on LBC, Talk Radio Europe, BBC, and RT news.

In this conversation, we openly chat with Ray whom at first seemed quite fine with a quick one long sentence describing his past. But I wanted to know a bit more detail. You will find as I have grown to know, that Ray is a warm, approachable, humble person that happens to have a heart that considers the needs of others first. He rose from literally nothing as a teen run away in the mid-1970s in Britain, living where he could, often on the streets for months at a time. Like many he was struggling with understanding and coming to terms with his sexual identity s a gay man. He didn’t fully accept his sexuality until he was in his 30s. There weren’t many ways then for him to explore, learn, share, and express himself. He found himself standing across the street from known gay bars assessing the men who entered and exited until one day he mustered the courage to venture in. During this time to get by, he’d often share a flat whom many often also ended up being closeted gay men all too afraid to even share or talk about with each other. So even when he was fortunate enough to have a roof over his head he lived in silence out of fear of being discovered. His life has truly been about helping others. Helping them meet the basic living necessities, rise to improve their situation. As news spread of his political win, now an out gay man, his success and community victories were not praised by all. He was stalked, harassed, had to be placed into police protective custody, and while there was chased by armed men who shot at him. The bullet luckily only grazed his chin, but had the aim been spot on Ray would have lost his life that day. Part 2 shines a light on an unsung female British hero Ray believes does not get the rightful recognition she deserves. Stick around for that interesting and intriguing story that Netflix has optioned.