Each episode of Jack Fire Drag Queen Summer Glamp features the fabulous trio completing various glamping-inspired challenges with help from the distillery’s staff. From BBQing outdoors to burning charcoal in the rickyard, Bebe, Trinity, and Manila will put the ‘glam’ in glamping as they learn the art of whiskey making and educate locals about drag culture. The series takes Pride Month back to the great outdoors and far beyond city limits to create a bold new experience – for both the queens and their hosts.

Below are the episode descriptions for Jack Fire Drag Queen Summer Glamp:

Local sweepstakes: Summer Glamp Giveaway
To promote Jack Fire Drag Queen Summer Glamp locally, Jack Daniel’s is partnering with LGBTQ+ influencers in select markets (San Francisco, Los Angeles, New York, Chicago, Miami and Houston) to conduct a series of sweepstakes. The grand prize for each region is a Jack Daniel’s glamping kit and a $750 gift card that can be used towards a glamping experience. For complete rules and details on how to enter, visit here.

“The idea of three big city drag queens glamping out at the iconic Jack Daniel Distillery was an experience I couldn’t pass up,” said Bebe Zahara Benet. “I had no idea what to expect, but the distillery staff really rolled out the red carpet for us. Who would have thought we had so many fans in Lynchburg?”

“Jack Daniel’s gets drag culture–which is all about celebrating individuality and inviting others to accept you as you are,” said Trinity the Tuck. “As someone from a small town in Alabama, I’m thrilled to be part of a series that promotes dialogue between different communities while raising visibility of LGBTQ+ people in rural areas.”

“This is how Pride should be celebrated: with friends — new and old — in a place you would never expect,” said Manila Luzon. “After a year in lockdown, it’s great to be back outside doing the things we love while also experiencing something totally new.”

“Jack Daniel’s Tennessee Fire is honored to partner with Bebe, Trinity, and Manila on a campaign that reaffirms our commitment to the LGBTQ+ community,” said Lauren Richmond, Jack Fire Brand Manager. “This series demonstrates our brand’s holistic approach to engaging the consumers we serve through culture and unexpected partnerships.” 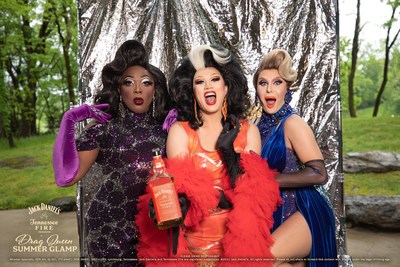