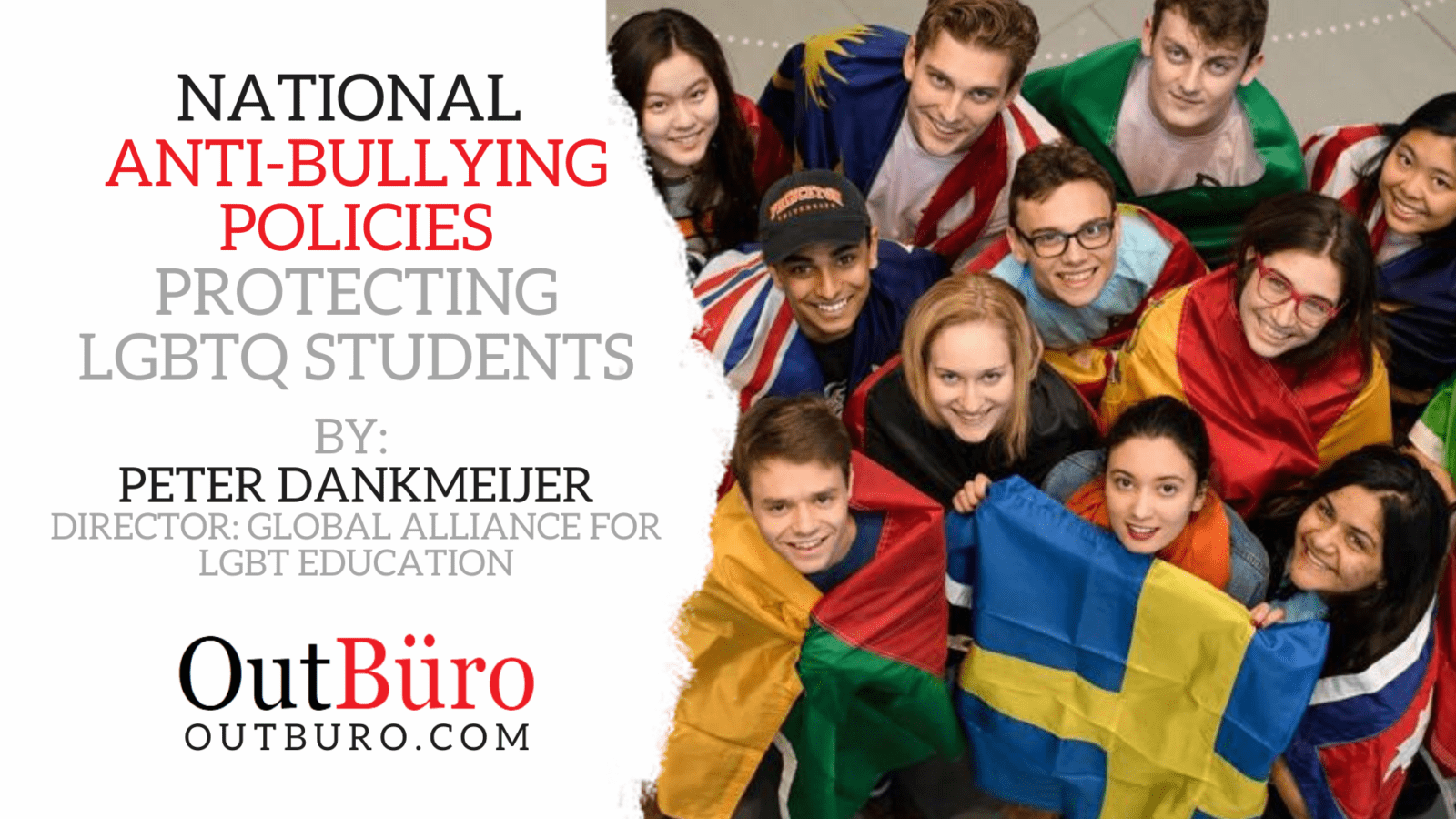 This is the third of three articles covering this topic written specifically for OutBüro. Please share your comments, thoughts, and ideas in the comment section.

Over the years 2018-2020, a European partnership of 16 organizations (7 NGOs and 9 schools) worked together on an antibullying project which aimed to develop a method high schools can use to review their antibullying policy and to plan improvements. The project was called the “Anti-Bullying Certification” project (ABC, https://www.gale.info/en/projects/abc-project) because the original aim was to develop a certificate for good antibullying policy.

One of the aspects that we encountered was that a school antibullying policy is partly dependent on the national policy framework. The national legislation or guidelines may determine the possibilities or limits or school policy. In this article, we will reflect on how states/countries organize this and what could be improved – from a European international perspective. We based ourselves on a review of European anti-bullying policies and on a more specific analysis of the five participating countries: the Netherlands, the UK, Spain, Italy, and Greece. In addition, we based ourselves on a range of national strategic workshops that GALE facilitated in about 20 countries.

There are great differences in how education systems are organized. Some states are centralized and schools are owned and managed in detail by the government. For example, if students in France move from Paris to Marseille, there is no problem in shifting schools because every school offers the same lessons in the same school period. If a class of Greek students wants to go on an international trip for the Erasmus + program (the European international exchange program for schools), they are required to have written permission by the Ministry of Education. In centralized countries, any change should be requested from the Ministry of Education and it will be unclear if a decision will be based on a democratic process. If a change is adopted by the Ministry, it becomes mandatory for all schools at once. However, the implementation of new measures – like national antibullying policy – may not be adopted enthusiastically by all schools because the policy is implemented top-down, and little or no attempt is made to create commitment among the schools. It may be that schools abide by the rule by going through the motions but without much commitment.

For diversity, centralized education policy is a double-edged sword. On one hand, LGBTIQ NGOs can approach the Ministry of Education and convince the ministry to adopt the policy to include (LGBTIQ) diversity. For example, in Greece, the recent HOMBAT project (https://www.hombat.eu/) focused on developing teacher training on sexual diversity, but also organized national expert meetings and follow-up consultations with the ministries and with the education sector in Lithuania, Greece, and Cyprus. With this sustainability strategy, the partner NGOs stimulated a more inclusive national anti-homophobia and anti-transphobia strategy. In Greece, the government decided to organize an annual school week focused on gender issues. LGBTIQ issues would be integrated in the Gender Action Week. They considered a specific anti-homophobia campaign a bridge too far for the conservative population and feared backlash from the neo-fascist populist “Golden Dawn” party. So in a sense, the action of the NGOs was successful. At the same time, we saw that many schools engaged in the Gender Week only as a (heterosexual) #MeToo topic, despite the initiative coming from the LGBTIQ movement.

Other states are decentralized. This means that the state only sets a limited number of framing criteria and obligations, and schools are free to implement their own policy within those frames. This policy is often heavily influenced by a more general neoliberal “laissez-faire” policy.

Decentralized states differ to what extent they allow the school’s freedom. In extremely neoliberal states, the state considers the schools as private “companies” who set their own standards and compete with each other in a free market. The free market and competition for students are supposed to create a high quality of education. In practice, this is rarely the reality because the available funding and fees are of crucial importance for the actual quality. Some schools attract rich students and have high fees, and can offer high-quality education. Other schools cater to a poor community, get fewer fees or funding and the coagulation of factors leads to a lower quality of education, often despite the hard work of some persistent teachers and students.

In the case of anti-bullying policy there is a wide difference to what extent states set criteria for schools. In the ABC-project, most states (Italy, Spain, UK, the Netherlands) have a decentralized education system.

In Italy, there is national anti-bullying legislation for schools, and there is additional strong legislation on – for example, cyberbullying and sexual intimidation – and this specific legislation is also covering the education sector. The Italian legislation gives elaborate guidelines and the proper implementation of the guidelines is supported by a national “Adolescent Observatory” and local observatory offices. The observatory monitors youth trends, youth language, and behavior, and offers training and support to teachers and school

to implement various policies. In this way, the anti-bullying policy is always up-to-date and connected to young people’s needs and cultures, and it is also integrated in a wider perspective of pedagogy and community action.

In contrast, in the Netherlands, there is an anti-bullying law that only makes it mandatory for schools to do research, to have a coordinator, and to have a plan. There are no qualifying criteria for the research, the coordinator, or the plan. The national school inspectorate is supposed to check the implementation of this legislation but the lack of criteria limits this to a bureaucratic check of whether the research, coordinator and plan are there at all.

The decentralized nature of the policy implies that external NGOs aiming to raise the quality of anti-bullying policy in schools have to go to all the schools individually if they want to stimulate and support change. The national LGB grassroots organization COC does this by promoting Gender and Sexuality Alliances (GSAs) and offering peer education by LGB volunteers. Regrettably, these interventions do not have much impact on school policies. On the contrary, many schools use the existence of a GSA or inviting COC-peer educators as an excuse to not work on structural school safety for LGBTIQ students. The Dutch NGO Edu-Diverse offered schools consultancy to improve the quality of LGBTIQ sensitivity in school policy in a more structural way. Edu-Diverse will redevelop the ABC-self-assessment procedure into a “Gaynergy” label that LGBTIQ NGOs can use to stimulate and support schools to deliver LGBTIQ specific anti-bullying quality. Still, because the Netherlands is utterly neoliberal, the “Gaynergy” label will have to be marketed as a cost-covering product. Moreover, it will have to “compete” with GSAs and LGB peer education. Even the COC views LGBTIQ-emancipation as a free market in which other interventions and strategies are a threat to their own products and marketing.

The ABC-partnership made reviews of the national anti-bullying policies in the participating countries. Based on the specific situations, – if possible – recommendations were formulated to improve the national legislations. The best recommendations for national policies were based on a thorough analysis of how changes in the education system come about, which type of changes are feasible within the timeframe and which actors have to be influenced to stimulate such improvements.

For example, in the Netherlands, the limited anti-bullying legislation we mentioned was adopted in 2015 after an intensive discussion in the parliament. The School Boards Association strongly resisted the original quality criteria in the law (“to use proven effective methods”). Because the Dutch system is so decentralized, the strong resistance of the schools themselves made it difficult for politicians to push quality criteria and it resulted in the three “empty” requirements. In return, the School Boards Association promised to implement a national Anti-bullying Action Plan. The implementation of the Action Plan stalled when the Ministry of Education and the School Boards Association could not agree on who would pay for it. In 2020, there is little political openness to reopen the discussion; politicians cannot “score” on this topic.

Although the anti-bullying legislation was prompted by a series of high school student suicides after they were bullied – and it was clear homophobia played a major role in some of the suicides – the Ministry resisted any mention of diversity in the legislation, let be specific mention of LGBTIQ issues. When asked about this, the responsible State Secretary said that schools had to be sensitive to all diversity issues, but that LGBTIQ issues were already covered by the budget of the department of education (which finances the GSA-campaign and LGB peer education).

In this situation, GALE and Edu-Divers developed five recommendations, which carefully suggested that the original aim of the anti-bullying legislation has not been met. Next to advocating for a new political discussion – which is probably unfeasible, the recommendations also point to more basic practical solutions that could be implemented by the School Boards Association itself. The Association maintains a website where schools can report on their quality. All members of the Association are required to do this, which makes this website a non-formal tool that sets quality standards, simply by the way it requires the school to report. GALE and Edu-Diverse recommended that the School Boards Association improves its own online framework by being more specific on how schools can prove the quality of their anti-bullying policy. It offers the ABC-self-assessment tool as an example. In addition, GALE and Edu-Diverse asked to resume the discussion on the stalled Anti-bullying Action Plan.

The analysis and recommendations in the Netherlands show how challenging it is for the LGBTIQ movement to improve anti-bullying policies in schools. The struggle in a decentralized and neoliberal context takes place in an often untransparent maze of institutions and procedures and a range of stakeholders with competing interests are pushing their own agendas. Neoliberal governments don’t feel the need to coordinate or guide this. And to some extent, this makes clear that the LGBTIQ movement not only has to fight for specific LGBTIQ visibility or safety that is should also be critical of these larger political strategies and decisions. Semi-dictatorial centralized government policies can be a risk, but hardline neoliberal policies can be detrimental as well. 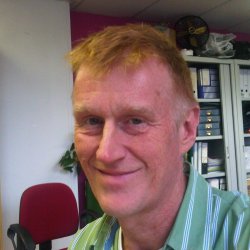 About the author: Peter Dankmeijer
Peter Dankmeijer was trained as a teacher, but works now as senior consultant on LGBTI issues. He is director of the GALE, the Global Alliance for LGBT Education ( a global network of about 1000 educators, providing an exchange platform and doing projects, www.gale.info).