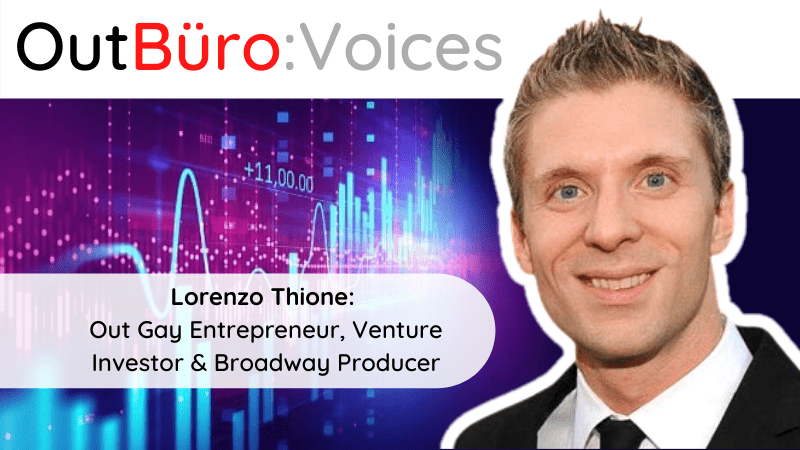 Lorenzo is a serial out gay entrepreneur, venture capitalist, writer, Broadway producer, and LGBTQ non-profit founder. Born and raised in Italy, he moved to the United States to attend college in Texas focusing on computational linguistic artificial intelligence. He co-founded his first start-up business right out of college and it’s been the entrepreneur’s path ever since.

Thione is the Managing Producer of Sing Out, Louise! Productions, the co-founder and CEO of The Social Edge, and a Managing Director at Gaingels (https://www.gaingels.com), a venture investment group based in NYC focused on investing and supporting LGBT+ founded/led startups, and socially responsible companies focused on supporting LGBTQ equality. In addition to his work as an entrepreneur, technologist and venture investor, Lorenzo is the co-creator/co-book writer and the lead producer of Allegiance, the 2015 Broadway musical starring George Takei and Lea Salonga. In developing Allegiance, he developed and deployed social-media viral strategies that led to the astounding growth and unprecedented awareness and audience engagement for both George Takei and Allegiance’s social media platforms, and – in turn – to the founding of The Social Edge, a social media management and marketing firm based in NYC. His producing credits include The Inheritance, Slave Play, Hadestown (Tony Award), Cher Show, The New One, Catch Me If You Can (Tony Nomination), and American Idiot. Additional IMDB credits: George Takei’s Allegiance (Director, Executive Producer), Bandstand – The Boys Are Back (Director, Executive Producer), Allegiance To Broadway (Executive Producer).

Besides being an active investor in the LGBT+ startup ecosystem via his position in Gaingels, Lorenzo is a founding board member and Chair Emeritus of StartOut, a non-profit organization dedicated to fostering and developing entrepreneurship within the LGBT community. A native of Milan, Italy, Lorenzo holds an M.S. in Computer Engineering from the University of Texas at Austin and has co-authored several publications in Software Engineering and Computational Linguistics. He is an active investor, advisor, or board member, in over 80+ startups and a named inventor on over 30 pending and issued patents in the US and worldwide.