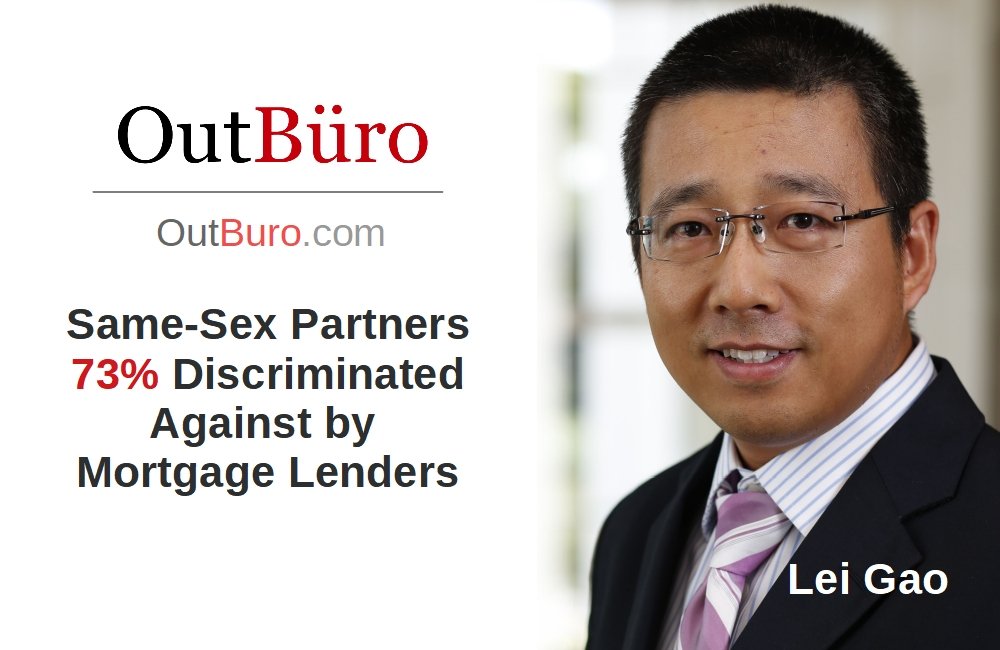 Purchasing a home is a significant life event for most. The process is both exciting and stressful To add to that stress a new study suggests home mortgage lenders are less likely to approve gay and lesbian same-sex couples.

The study, by researchers at Iowa State University’s Ive’s
Ivy College of Business, focused on national mortgage data from 1990 to 2015 and found the approval rate for same-sex couples was 3 to 8 percent lower. The research also included more detail dive about applicants’ work history and creditworthiness analyzed from a smaller dataset. Based on this data, same-sex applicants were 73 percent more likely to be denied than heterosexual couples.

Gay and lesbian same-gender couples who were approved paid higher interest and fees. Co-authors Hua Sun (pictured right) and Lei Gao (pictured in featured image), associate and assistant professors of finance, respectively, say the difference in finance fees averaged less than .5 %, but combined added up as much as $86 million annually.

Another research study published by the Proceedings of the National Academy of Sciences, found no evidence that gay and lesbian couples had a higher risk of mortgage default.

“Lenders can justify higher fees, if there is greater risk,” Gao said. “We found nothing to indicate that’s the case. In fact, our findings weakly suggest same-sex borrowers may perform better.”

While mortgage applicants are not required to disclose their sexual orientation, however when two women or two men walk in for a home loan through information causally shared while the couple is just being themselves can lead to discrimination. As indicated in another study by the University of Surrey, indicating that during an employment hiring process, LGBT people are discriminated against based solely on their appearance and/or speech. The Surrey study found that person who may or may not be LGBT but are preceived as being so are less likely to be hired, promoted and paid less than their heterosexual counterparts. This perception is just as damaging in terms of discrimination in the mortgage lending process the researchers say.

Check out this related study by Prudential on the financial health of American by gender, race and sexual orientation.

Sun and Gao say the findings of their Mortgage Lending study illustrate a need for change to make the lending laws fair for everyone. Loan decisions should be not be based on, not skin color, sexual orientation or gender. Lending should be based only on fundamental economic factors. Sun says making sexual orientation a protected class would limit potential discrimination.

The Fair Housing and Equal Credit Opportunity acts prohibit discrimination based on a borrower’s race, gender, marital status or religion, however, neither specifically, list sexual orientation.S

Mortgage lenders though can move ahead of government and as a business ensure their company polices include being open, welcoming and fair to the LGBT community in their lending practices.

Sun and Gao used data from the Home Mortgage Disclosure Act, the Federal Reserve Bank of Boston and Fannie Mae Loan Performance to test whether perceived sexual orientation affected mortgage approval, cost and performance. Utilizing these datasets allowed researchers to validate their findings and control for factors such as income, variations in lenders’ underwriting standards and property type, which may influence approval rates.

Co-applicants with the same gender were identified as same-sex couples for the study. The researchers used Gallup and Census Bureau data of geographic distributions of LGBT adults to verify their identification strategy and reported a good matching quality.

Previous research has shown that recent home purchases or refinancing in a neighborhood can predict defaults, which influences mortgage lending approval and interest rates. To determine if the percentage of LGBT individuals living in a neighborhood contributed to the disparity in approval rates, Sun and Gao looked at county-level percentages of same-sex applicants each year.

What they found was somewhat surprising. In neighborhoods with more same-sex couples, both same-sex and different-sex borrowers seem to experience more unfavorable lending outcomes overall. The researchers say the findings should raise enough concern to warrant further investigation.