OutBuro is striving to bring information to aid LGBTQ students along their learning path and early career as well as to be a professional platform where they can start to build their professional network, seek mentors, and find great jobs. 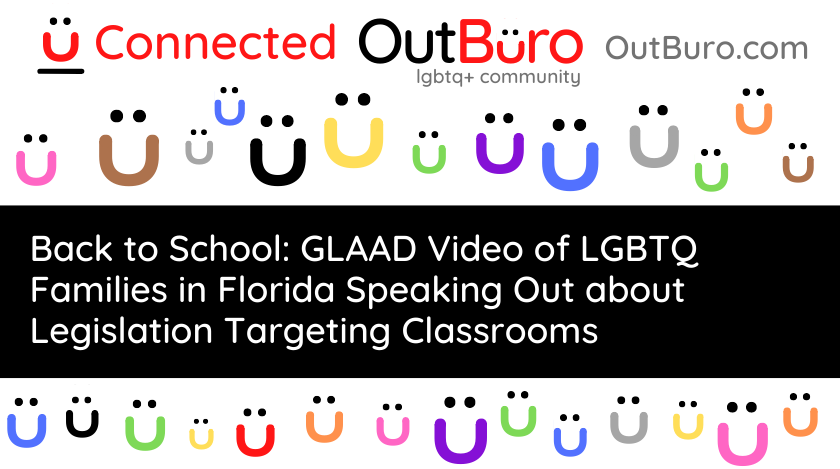 TALLAHASSEE, Fla. and NEW YORK, Aug. 10, 2022 /PRNewswire/ — GLAAD, the world’s largest LGBTQ media advocacy organization, and Equality Florida are releasing video of LGBTQ families and educators in Florida speaking out about returning to school today with new laws in effect targeting them.

Newsrooms can download the videos, scripts, additional interviews, stills and graphics to include in their back to school coverage.

New laws are banning LGBTQ-related conversation in class, books are removed from shelves and state leaders are targeting evidence-based healthcare, despite the fact that every major medical association supports it as safe and lifesaving for transgender youth.

GLAAD’s poll of LGBTQ and ally voters in Florida finds 71% believe the laws’ intent is to attack LGBTQ people; 70% say the laws are emotionally damaging to children.

The poll shows 77% strongly agree it’s more important than ever to vote as human rights for women and LGBTQ Floridians are being taken away by elected state officials, and that 67% are “extremely motivated” to vote in the midterm elections.

“Florida’s LGBTQ and ally voters must send an unmistakable message that they are not going back in the closet or back in time,” said GLAAD President and CEO, Sarah Kate Ellis. “Discriminatory, defamatory and dangerous rhetoric and behavior must stop now.”

“It is imperative that Floridians use the power of their votes to hold Governor DeSantis and his allies accountable for the hate they unleashed on our state,” said Equality Florida Press Secretary, Brandon Wolf.

About GLAAD:
GLAAD rewrites the script for LGBTQ acceptance. As a dynamic media force, GLAAD tackles tough issues to shape the narrative and provoke dialogue that leads to cultural change. Visit www.glaad.org, connect on Facebook and Twitter, contact: press@glaad.org WASHINGTON, Aug. 3, 2022 /PRNewswire/ — Today, the Center for Democracy & Technology (CDT) released new research detailing the concerning impact of software that tracks students’ online activity on devices like laptops or tablets. With 89% of teachers reporting the use of such software in their schools (up five percentage points since last year), the report cites students being targeted for disciplinary actions, law enforcement contact, and being outed without their consent.

“We’ve found that nearly every school in the country is giving devices to students – and monitoring is hurting them,” says CDT President and CEO Alexandra Reeve Givens. “Our data shows that nearly half of teachers say they know of at least one student who has been contacted by law enforcement as a result of student activity monitoring. When you combine the resurgence of violence in schools with the mental health crisis among kids, schools are surveilling students’ activities more than ever. But these efforts to make students safer more often result in disciplining students instead.”

The report cites students being targeted for discipline, contacted by law enforcement, and outed without consentTweet this

“Certain groups of students, like those with disabilities, Black and Hispanic students, and  LGBTQ+ youth, bear the brunt of the unintended consequences of student activity monitoring.” says Elizabeth Laird, Director of the Equity in Civic Technology Project at CDT. “Fortunately, federal laws already exist to protect these students, but they must be enforced–which is why CDT is calling on the U.S. Department of Education to protect students’ civil rights online in the same way they do in the classroom.”

Disciplinary actions that resulted from student activity monitoring fell disproportionately along racial lines, with 48 percent of Black students and 55 percent of Hispanic students reporting that they or someone they know got into trouble, compared to 41 percent of white students. 29 percent of LGBTQ+ students report that they or another student they know has had their sexual orientation or gender identity disclosed without their consent. Finally, students with a learning difference or physical disability were more likely than their peers to suppress their true thoughts online because they know they are being monitored.

Givens noted that student monitoring is also a concern after the Supreme Court’s overturning of Roe v. Wade, since students seeking to access reproductive health websites or message friends about abortion options must now anticipate the risk of being monitored or potentially flagged for law enforcement in states where abortion is illegal.

In response to the new research, multiple influential civil society groups have signed a letter calling for the U.S. Department of Education’s Office for Civil Rights to issue a policy statement that clarifies the ways that student monitoring technology violates civil rights laws, condemns surveillance practices that run afoul of these laws, and states its intent to take enforcement action against violations that result in discrimination.

The research was compiled based on surveys of parents, teachers, and students. You can find the full text of the research report and corresponding summary report here.

For more information about the report or to be connected to a spokesperson from CDT, please email Press@cdt.org or call (202) 407-8811.

CDT is a 27-year-old 501(c)3 nonpartisan nonprofit organization that fights to put democracy and human rights at the center of the digital revolution. It works to promote democratic values by shaping technology policy and architecture, with a focus on equity and justice. The Equity in Civic Technology Project works to advance responsible civic technology use and strong privacy practices that protect the rights of individuals and families.

SOURCE Center for Democracy and Technology

There are many resources in the United States that US and international lesbian, gay, bisexual, transgender, queer, asexual, intersex, queer, and questioning (LGBTQ) students should be aware of during their time on U.S. campuses. This more important than ever since the number of American young adults ages 18-23 who self-identify as LGBTQ+ is 15.9% according to a February 2021 Gallop Poll study. In that study, 7.9% of all respondence chose not to answer the question of sexual orientation so the actual number could be statistically much higher. Further, a study by the University of Surrey found that 29% of American’s between 18-30 years old who self-identify as heterosexual self-report having same-gender sexual experience occasionally.

The below links and information is meant to provide prospective international LGBTI students with a better understanding of the resources available to them at U.S. colleges and universities and through LGBTI organizations in the United States. Many individual campuses also have LGBTI student services and associations that maintain further information.

OutBüro: OutBüro is an LGBTQ online community for LGBTQ professionals and entrepreneurs. It is NOT like Facebook, Instagram, Tiktok, or a hookup site. It is more like LinkedIn, only queer. recently a former Facebook head of Human Resources said in an interview with OutBüro that 80% of jobs are filled through connection networks. Start building your LGBTQ professional network on OutBüro through groups. There is a group for LGBTQ students, industry groups, entrepreneur groups, local groups, and more. Consider starting a group for your school to interact with current students to over time build an alumni presence. You can even search for LGBTQ professional who has indicated they are open to being a mentor. As employers come on to the site and share all they do for their LGBT employees and the community. Additionally, check out the growing number of current and recent past employer ratings/reviews from LGBTQ employees right alongside job listings by those employers.

Campus Pride: Campus Pride is a national non-profit organization that assesses the LGBTQ student environment of universities and colleges.

Point Foundation: Point Foundation empowers promising lesbian, gay, bisexual, transgender, and queer students to achieve their full academic and leadership potential – despite the obstacles often put before them – to make a significant impact on society. Their website includes a host of resources, including scholarship information. See our article: Point Foundation: LGBTQ Students Apply for Scholarships

CenterLink: Many cities and towns in the United States have large LGBTI community centers that often work on specific LGBTI rights issues and provide a safe space for all LGBTI persons. CenterLink is a U.S. member-based organization that supports the development of strong, sustainable LGBT community centers.

LGBTI Health Resources: The United States Centers for Disease Control (CDC) provides information on LGBTI health issues and a listing of health clinics and service providers that serve the LGBTI community in particular.

Crisis Intervention: The Trevor Project is a the leading national organization providing crisis intervention and suicide prevention services to LGBTI youth. Call, text or live chat with trained persons who can help.

Legal Status of LGBTI Issues in United States: The legal protections for LGBTI persons vary from state to state; the Human Rights Campaign (HRC) has created digital maps to illustrate these.

Consular Questions: For more information on consular issues for LGBTI students who are planning to apply for a student visa and their spouses or partners, please check the State Department’s Consular Affairs page on student visas.

PFLAG: Does your parent, guardian, or family members need support? Suggests Parents and Friends of Lesbians and Gays. They have lots of information on their website and hundreds of local chapters.

Important Notice: Same-sex spouses of U.S. citizens and Lawful Permanent Residents (LPRs), along with their minor children, are now eligible for the same immigration benefits as opposite-sex spouses. Consular officers at U.S. embassies and consulates will adjudicate their immigrant visa applications upon receipt of an approved I-130 or I-140 petition from U.S. Citizenship and Immigration Services. For further information, please see the Consular Affairs Frequently Asked Questions page.