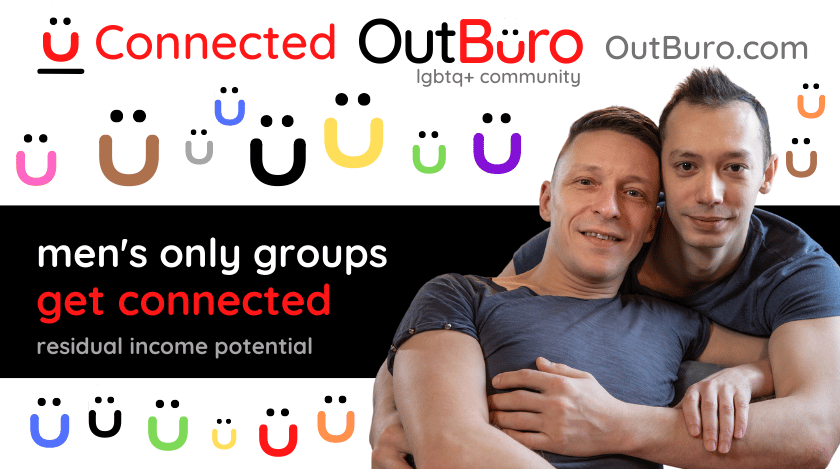 We recently implemented the ability to categorize groups. Now at the top level, you can choose to go to the group list categorized for men.

All while shaping your own OutBüro experience and the community. See the What can I do in Groups, and Control Your Experience articles. in the Knowledge Base.

Access to groups is now part of the Yearly/Monthly membership plans.

Here are a few ideas for groups you might create:

etc… you get the idea.

If you create it, be direct or creative with the group name, avatar, and cover. Check out the Joining and Creating Groups Knowledge Base article.

We recently refocused the site and allowed active Yearly/Monthly members to optionally be affiliates/influencers and earn a residual income. Check out the Affiliate/Influencer Income Estimator.

Are you interested in the group because you are a writer or content creator? See Get Published on OutBüro.

Who doesn’t like a bit of news, great information, warm fuzzy stories, learning something new, or just a good chuckle?

We know the challenge it can be to craft good to great to amazing content. Don’t think we’ve hit amazing yet, but striving to do so and would love to have you be part of our journey. We’ve always welcomed posts from site members. As OutBüro shifts to a paid membership model, we are striving to support the community and grow together.

With the recent shift, OutBüro is now an LGBTQ whole self inclusive platform. Articles and content can be about pretty much anything. We’d love original content, but 100% fine with it living on your own site as well. Press releases, business product or service awareness, informational, how-to, educational, entertaining, editorial, opinion, news, and others. OutBüro currently has wide topic categories and we are open to adding other top-level categories. Tags and hashtags may also be used to hone your article/content SEO.

You are welcome to link to your site within your content to grow your search engine love juice.

We have implemented a system integrated into analytics to track many forms of interaction with a post. Provides an Author Income and Page Performance Dashboard. We want to strive for a good balance of value for all coupled with the 1st revenue stream. From word count, a number of images or videos, total views, unique views, comments, and more for a holistic view. We’ll be working on a Post Income Estimator soon and will update this when ready. We’ll be open to constructive feedback on the base and have the ability to provide per author unique plans if agreed.

Joining the discussion are Monica Forrester, the director of Trans Pride Toronto and an award-winning activist who fights for low-income and racialized trans people; and Toni-Michelle Williams, the executive director of Solutions Not Punishment Collaborative (SNaPCo), an Atlanta-based organization working to build safety and end the criminalization of the Black trans community. Together, they’ll explore a conversation on why trans women of colour sex workers are leaders in the revolution in sexual liberation.

Host Chanelle Gallant says, “I believe that sex workers have developed the most transformational sexual liberation politics of any social justice movement. But Black trans women sex worker activists like Toni-Michelle Williams and Monica Forrester do not get the recognition they deserve as visionaries dreaming a new world and as political leaders strategizing on how to get us there. This event is an opportunity to listen to Forrester and Williams in conversation as they bring together inspiring political vision with humour, compassion and so much wisdom about sex.”

“Times have changed since the founding of Pink Triangle Press 50 years ago and it was time to revisit what sexual liberation means today,” Gallant says. “With the Protest and Pleasure series, I set out to explore how power, money and politics shape our sexualities by talking to some of the most brilliant LGBTQ2S+ activists, thinkers and creators who are working toward social, economic justice and sexual liberation.”

Over this past summer, Xtra has been publishing “Protest & Pleasure,” a six-part series by Gallant in connection to Pink Triangle Press’s 50th anniversary. Pink Triangle Press has always been a leader in the sexual revolution, leading through their journalism that’s been a major part of queer history in Canada and beyond.

Rachel Giese, director of editorial for Xtra, also connects the event to that queer history: “Fifty years ago, a fiery and idealistic group of activists in Toronto launched the influential (and occasionally infamous) gay liberation newspaper, The Body Politic, leading to the establishment of Pink Triangle Press, the publisher of Xtra. The aim of the founding collective was to advance the cause of sexual liberation—particularly for people who were marginalized. And that work is far from over: whether it’s the crackdown on adult content on sites like Tumblr and OnlyFans, the ongoing criminalization of sex work, or the pearl-clutching response to queer artists like Lil Nas X, many of us still are censured, censored or punished for our desires. So on this very important anniversary of Pink Triangle Press, Xtra wanted to look at what sexual liberation means in the 21st century. Chanelle Gallant—a queer writer and longtime activist for social and sexual justice—was the perfect person to work with on this series.” NLGJA: The Association of LGBTQ Journalists is pleased to announce that Matthew Berger and Sarah Blazucki will once again serve as co-chairs of NLGJA’s annual Dateline:DC event on November 15 at the Mitchell Gold + Bob Williams Signature Store, 1526 14th St, NW. Berger serves as the vice president for communications at Hillel International and Blazucki works as communications coordinator for a federal agency.

Berger is a former board member of NLGJA and holds a master’s degree in national security policy and a bachelor’s degree in political communications, both from The George Washington University in Washington D.C. He now manages all aspects of Hillel International’s communications and media strategy, and entered the position with nearly two decades of experience as a journalist and communications professional, with a focus on politics. His experience includes five years as vice president at Dezenhall Resources, a political reporter for NBC News and National Journal, homeland security correspondent for Congressional Quarterly and the national political correspondent for JTA.

Blazucki manages and edits publications, web content, information requests, marketing, and social media in Washington, D.C. Her previous positions include agency editor at the Peace Corps, editor of the Philadelphia Gay News and more than 15 years’ experience as a freelance résumé writer. While the editor at Philadelphia Gay News, Blazucki led the staff to win more than 20 awards. She serves as a director on NLGJA’s national board. Blazucki received her B.A. in mass communications, with a minor in women’s studies from Towson State University.

“Matt and Sarah are two of NLGJA’s most dedicated members and volunteers,” said NLGJA Executive Director Adam K. Pawlus. “I have no doubt that, under their leadership, this year’s Dateline: DC will be the best yet.”

Dateline: DC is an evening of networking and friendship, celebrating NLGJA’s commitment to advancing fair and accurate coverage of the LGBTQ community. The event includes a hosted bar and hors d’oeuvres.

Dateline:DC is an evening of networking and friendship, celebrating NLGJA’s commitment to advancing fair and accurate coverage of the LGBTQ community. The event includes a hosted bar and hors d’oeuvres.

Join NLGJA and our co-chairs on November 15 for Dateline:DC at the Mitchell Gold + Bob Williams Signature Store, 1526 14th St., NW. Tickets cost $35 for NLGJA members and $50 for non-members and are available online at www.nlgja.org.