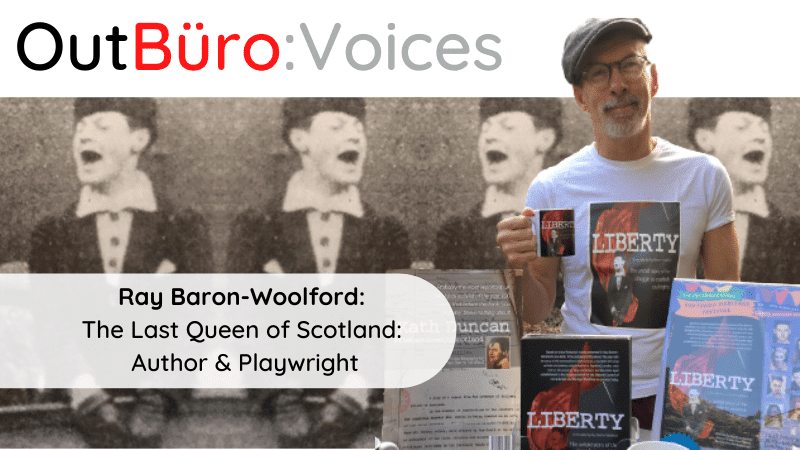 Ray Barron-Woolford is a lifetime community activist, broadcaster, playwright, and author. His most recent play is Liberty about Kath Duncan’s role in establishing the LGBTQ and civil rights movement in 1930’s Britain, laying the groundwork for The National Council Civil Liberties. Liberty is based on his book The Last Queen of Scotland exploring the rich and fascinating life of Kath Duncan.

Kath Duncan was a significant figure during the 1930s involved in nearly every significant civil rights movement, revered and respected by most. She was a personal good friend of Winston Churchill’s wife before she married Churchill and remained close. Kath was a lesbian and married a gay man to hide their sexual orientation during a time that was not welcoming. Due to her political views and activism, she was under surveillance by the British government. There is therefore a tremendous amount of documentation about her life, who she associated with, where she went, and even what she ate. Ray petitioned access to the government records on Duncan which offers his book on her incredible rich accurate details. After the book was released Ray was encouraged to write a play to help bring Kath Duncan’s story to life. In our, discussion Ray describes the process he went through and the details of creating a period of work. https://en.wikipedia.org/wiki/Kath_Duncan

In a short time, his play gained attention and he was contacted by #Netflix who optioned it as a movie or series.

She was a diminutive school teacher from Kirkcaldy who enjoyed an “extraordinary” friendship with Winston Churchill and spent two terms in jail as she led some of the biggest civil rights campaigns of her generation.

But the story of Kath Duncan, a powerful orator “everyone was scared of” has, up until now, gone largely unnoticed by a modern audience.

Newspapers of the day dedicated countless column inches to the activities of the Scot, who was involved at the highest level in campaigns such as the 1920s hunger marches and the fight against Oswald Mosley’s fascists. She took on slum landlords, rallied against gas price rises for the poor and, later, acted as a recruiter and fundraiser for the Spanish Civil War. She was also a suffragette. But her legacy has been largely airbrushed out of history, according to Raymond Woolford, author of The Last Queen of Scotland, who said Duncan should be celebrated as a working-class hero.

Woolford said: “We get taught about our kings and queens and tyrants and yet working class heroes, ordinary women like Kath, who became extraordinary, are left in the shadows. It is long overdue that Kath is recognised as a national treasure.

“In the post-war context, Kath would stand out from the crowd and become arguably the greatest UK civil rights activist of the past 100 years; no other activist was as forceful as her in her leadership in so many different campaigns.”

For more of Ray’s background watch or listen to Getting to Know Ray Baron Woolford – Part 1 at https://www.outburo.com/getting-to-know-ray-baron-woolford-part-1/