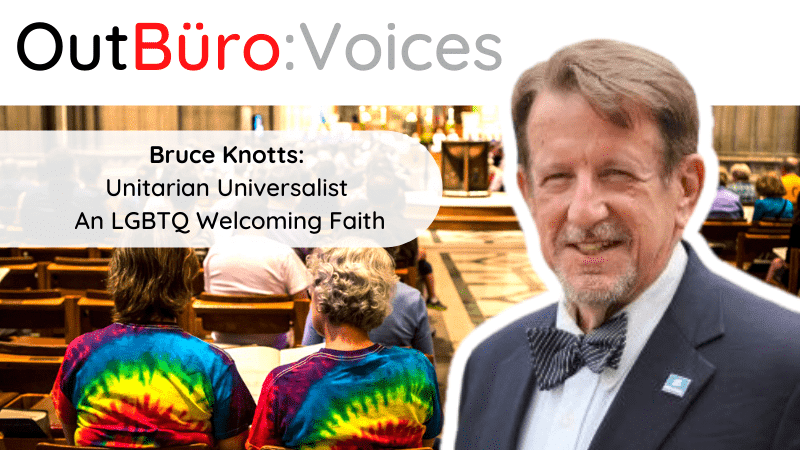 In this episode of OutBüro Voices featuring LGBTQ professionals, entrepreneurs, and community leaders from around the world, host Dennis Velco chats with Bruce Knotts, Director of the Unitarian Universalist Office at the United Nations.

In this chat with Bruce Knotts, we discuss what is Unitarian Universalist and each of our own paths to it as a welcoming faith that is welcoming and inclusive of #LGBTQ members. I would take that a step further, the Unitarian Universalist are champions of #LGBT people, not only with the congregations but for the dignity, rights, and equality of #gay, #lesbian, #bisexual, #transgender, #queer, questioning, intersex, asexual, pansexual, and heteroflexible people around the world. UUs are very social-justice-oriented such as the long-running #LoveIsLove campaign.

Learn more about Unitarian Universalist and locate a local church near you: https://www.uua.org/

Here is their LGBTQ page: https://www.uua.org/lgbtq

The UU faith is really not an individual faith but rather a celebration, exploration, respect, and openness to all world faiths and nonfaiths. What does that mean? No single world faith dominates. Each service may focus on teaching from any of the world’s faiths and often will explore a topic reflecting its views from many faiths in one service. There is ZERO religious dogma acknowledging the divine in all, there is no one right answer, each person is welcome to their own personal journey and truth. Services may include poetry readings, Pop music, and more. So in Unitarian Universalism, you can be your full authentic self while also practicing your spirituality on your own path. You are welcome.

So in Unitarian Universalism, you can be your full authentic self while also practicing your spirituality on your own path.  You are welcome. Unitarian Universalism includes learning about and welcoming all world faiths and nonfaiths including but not limited to: Atheism, Agnostic, Bahá’í Faith, Buddhism, Caodaism, Cheondoism, Christianity, Confucianism, Hinduism, Humanism, Hòa Hảo, Islam, Jainism, Judaism, Muslim, Nature-based spirituality, Old world spirituality, Paganism, Shinto, Sikhism, Spiritism, Taoism, and Tenriism.

All are welcome and it is a great spiritual home for families where partners may have different spiritual focuses such as one Buddhist and the other Agnostic or Christian. It can be a wonderful spiritual home for those that would like to connect or reconnect with their spiritual center in a welcoming open community free from judgment or dogma. In the next video/podcast we’ll continue this discussion and learn how under Bruce Knotts’ leadership through the UUA office at the United Nations he has been instrumental at the UN level for LGBTQ equality and rights around the globe.

Many United States founding fathers were Unitarian Universalists including several US Presidents. https://en.wikipedia.org/wiki/List_of…

Here are a few:

To connect with Bruce find him on OutBüro here. https://www.outburo.com/profile/bruceknotts/